Grommets are small plastic tubes that are placed in a hole in the eardrum. They allow air to get in and out of the ear and keep the ear healthy. They help children to hear normally and have fewer infections.

When do we use Grommets?

Do you need to take them out?

Grommets come out on their own. This is usually 9-12 months after they are put in. The exact time they fall out is quite variable as it is determined by the natural growth of the eardrum.

Does my child have to have Grommets?

Glue ear tends to get better as the child gets older. In some children this takes a long time. We tend to watch children for the first 3 months and then consider grommets if the problem still persists.

Prolonged courses of antibiotics have shown some benefit for hearing loss related to glue ear but the problem often recurs when the antibiotics are discontinued. Other medical treatments such as decongestants, steroids and antihistamines have been shown not to be helpful. A hearing aid can be used to treat the hearing loss associated with glue ear. This would mean your child could avoid an operation. Removing the adenoids helps the ears and reduces the chance of a child needing further grommets. It may be recommended at the time of grommet insertion. This will depend on nasal symptoms and the duration of the glue ear.

Can Grommets be harmful?

The surgery is usually very straight-forward and problems are rarely encountered. A very small percentage of children (around 1%) may develop a perforated eardrum following grommets. If this causes problems it can be repaired. Remember that all children having grommets have significant ear problems and some of these would develop eardrum perforations even if they did not have grommets.

What can I do to help my child?

Let nursery or school teachers know if your child has a hearing problem. It may help for them to sit at the front of the class. Once the grommets are in then the hearing usually returns to normal.

The Day of the Operation

Eating and drinking
Your child will be admitted on the morning of the operation and will have no food for 6 hours prior to the general anaesthesia. Clear fluids (water or clear juice) may be taken until 2 hours before the general anaesthesia. You will be advised of the exact times by the ward staff, who usually call you the day before the operation.

Before the Operation
You and your child will be seen by the anaesthetist and the surgeon. The surgeon will explain the procedure once again and ask you to sign a consent form.

What happens during the Operation?
The operation involves a short general anaesthetic. Using a microscope, a tiny hole is made in the eardrum (a “myringotomy”). The fluid is sucked out and the grommet is placed in the hole to keep it open.

What happens after the operation?

Grommets are generally not very painful and simple painkillers such as Paracetamol (Calpol) are usually sufficient.

Going Home
Around 3-4 hours after the operation, when your child has woken up and had something to eat or drink, then they can go home. The paediatric nurses will help decide exactly when your child has recovered enough to go home. Your child will be given antibiotic ear drops for 5 days. These are usually eye drops but they are for the ears.

Water Precautions
For the first two weeks after the operation you should try and keep water out of your child’s ears while the grommets heal into place. This means wearing an earplug when bathing or showering and avoiding swimming for the first two weeks. After the first two weeks your child can go swimming without ear protection. They should however avoid swimming in deep underwater as the extra pressure can force water through the small hole in the grommet. Whilst your child has grommets they should try and keep soapy water out of the ears. This means wearing ear protection when shampooing their hair. Earplugs can be bought from a pharmacy or made from cotton wool and Vaseline. They keep some water out but no earplug is perfect.

Flying
It is find for children to fly the day after grommet insertions.

A little discharge or blood from the ears is common in the first few days after grommets have been placed. Later on, if your child develops an ear infection, yellow fluid will come out of the ear. The infection drains through the grommet and often the child is well with no pain or fever. Antibiotics from your doctor will treat the ear infection. Some doctors use antibiotic ear drops whereas others prescribe antibiotics by mouth.

Back to school or Nursery

If your child has just had grommets (without adenoid or tonsil removal at the same time) they can go back to school or nursery the following day.

Your child will be seen in the clinic around two weeks after the operation. It is vital that your child attends this post-operative appointment as we need to ensure that the grommets have healed into place.
An appointment is then required every six months until the grommets come out. When the grommets come out the majority of children have grown out of the glue ear and do not have further problems. In a small number, the problem returns and further treatment can be considered.

If you have any concerns regarding your child’s post-operative recovery please telephone Mr Hartley’s secretary (during office hours) on 020 7390 8352.

Alternatively, please call the Portland Hospital on 020 7380 4400 and ask to speak to the Duty Sister who will be able to give advice. 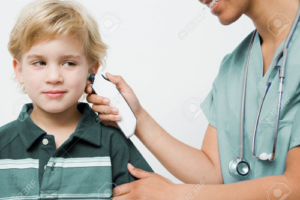